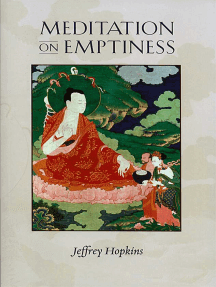 In this major work, Jeffrey Hopkins, on e of the world's foremost scholar-practitioners of Tibetan Buddhism, offers a clear exposition of the Prasangika-Madhyamaka view of emptiness as presented in the Ge-luk-ba tradition of Tibetan Buddhism. In bringing this remarkable and complex philosophy to life, he describes the meditational practices by which emptiness can be realized and shows throughout that, far from being merely abstract, these teachings can be vivid and utterly practical. Presented in six parts, this book is indispensable for those wishing to delve deeply into Buddhist thought.

Jeffrey Hopkins is Professor Emeritus of Tibetan Buddhist Studies at the University of Virginia, where he taught Tibetan Studies and Tibetan language for more than thirty years. He received a BAmagna cum laude from Harvard University in 1963, trained for five years at the Lamaist Buddhist Monastery of America (now the Tibetan Buddhist Learning Center) in New Jersey, and received a PhD in Buddhist Studies from the University of Wisconsin-Madison in 1973. From 1979 to 1989 he served as His Holiness the Dalai Lama's chief interpreter into English on lecture tours in the U.S., Canada, Southeast Asia, Great Britain, and Switzerland. He has published more than twenty-five books, includingMeditation on Emptiness, a seminal work of English language scholarship on Tibetan Madhyamaka thought, as well as translations of works by Tsongkhapa, Dolpopa, and His Holiness the Fourteenth Dalai Lama. At the University of Virginia he founded programs in Buddhist Studies and Tibetan Studies and served as Director of the Center for South Asian Studies for twelve years.